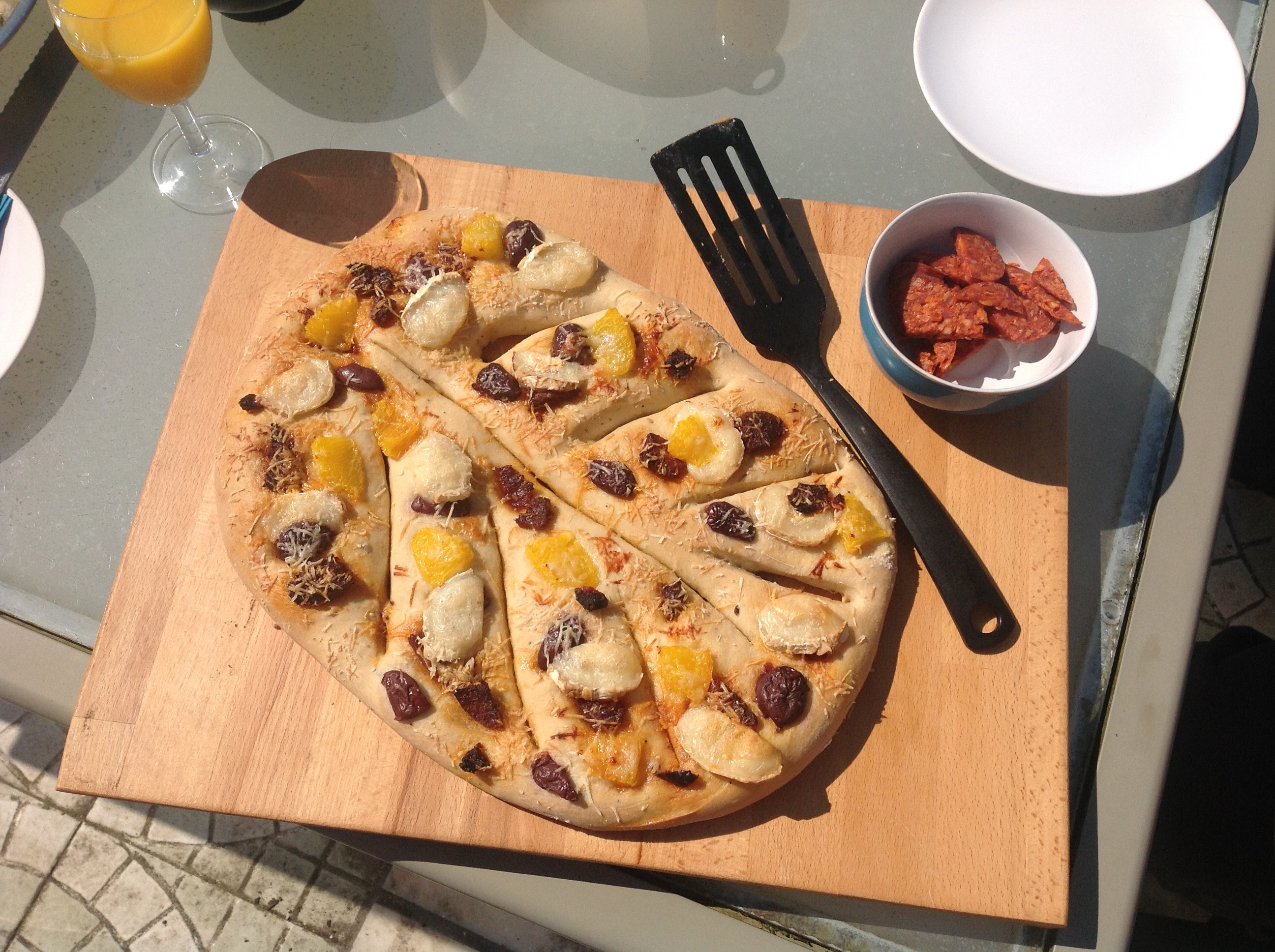 We have had some fantastic weather over the Easter weekend, I was looking for some new recipes to celebrate the sunshine. 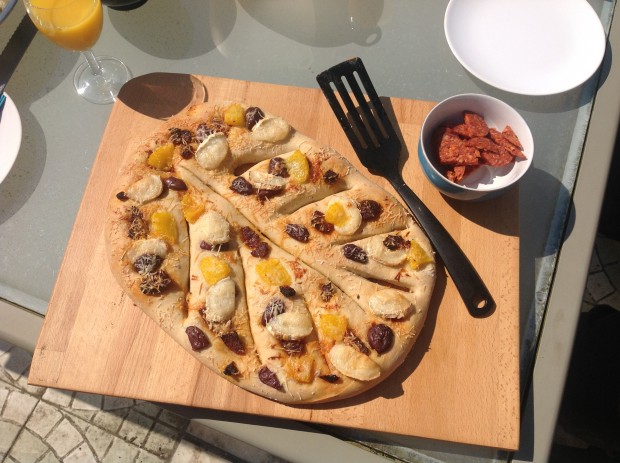 The first idea was some Fougasse, a typical french flat bread, that lends itself to many of the flat breads to have various toppings. I had a look at what was in the fridge and decided on Chorizo, orange and goats cheese, I have a recipe for this combination in a salad, and so it was the inspiration for this bread.

I started off by making the bread, and I have discovered that the use of sour milk or milk with a teaspoon of vinegar gives a nice soft crumb to the bread, which is called for when you have this type of bread as it seems to take the high heat of the oven that you need to achieve that crust without the hard bread.

Once the dough has proved for the first time, then it was down to rolling and shaping and them topping. As I said I decided on some chorizo, orange segments and some slices of goats cheese, then a sprinkling of Parmesan cheese for added texture and colour.

The results were fantastic (even if I do say so myself ).

Heat the sour milk in a pan or in the microwave, you need it to be warm, not boiling.

Place the flours, yeast and salt into the bowl of a mixer, mix by hand just to make sure you have an even blend of the dry ingredients, then add the olive and 2/3rds of the milk, turn on the mixer and with the dough hooks, bring everything together, it will more likely be dry at this stage, so continue adding the remainder of the milk and continue mixing until it is all combined and you have a your dough (you may need to add a little more liquid, this can be more milk or water.) You want the dough to be a little sticky but not wet.

Continue kneading in the mixer for 3-4 minutes then remove the dough from the bowl onto a lightly floured table top and finish off the kneading by hand, until you have a soft smooth dough, to test to see if it is ready to prove, pull the outside down and tuck under the ball and press with your finger, if it bounces all the way back, then its ready, if not, then continue kneading and test again.

Pour a little oil into your bowl and place the dough in the oiled bowl, cover and leave for 15/20 minutes to rest.

Prepare a baking sheet with some grease proof paper.

While the dough is proving get the topping ingredients ready.

Take your Chorizo sausage, peel and cut into slices and slice the goats cheese into similar sized slices.

Then segment your orange, using a sharp knife cut the skin off exposing the segments inside and then with the orange in the palm of your hand and over a small bowl, run the knife on the inside of one of the segments and then the other side and the flesh should just pop out, continue until all of the segments have been released.

Put the dough onto the paper and push down and out, try not to rip the surface. Push the dough out towards the edges of your tray and use a rolling pin, just to give you a level dough.

To give it an authentic french look, then using a very sharp knife cut some slashes through the dough (like a leaf effect) and pull apart slightly so you open up the slashes.

Then place evenly but randomly your toppings, over your dough and push down slightly so they are actually in the dough and not just sitting on the top.

Leave the dough to rise for 15 minutes and pre-heat your oven to 240C.

When you are ready, place the dough in the oven and cook for 10 minutes at 240C and then reduce the oven to 200C and continue cooking for a further 15 minutes.

Remove from the oven and allow to cool for 10 minutes and then place on a board for cutting.

I served it with a little orange and mustard dressing and a fennel and apple salad.

We thoroughly enjoyed this fougasse, I hope you do too.