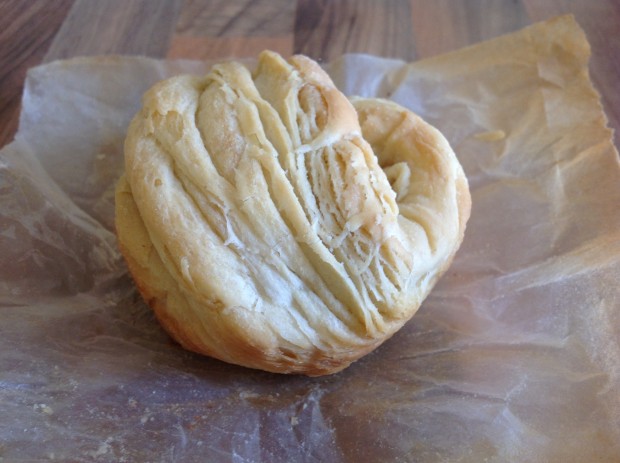 Buttery flaky pastry, whats not to love about this.

I don’t need to ask myself that question, do you?

This weekend the air has been ringing with the sound of motor bikes, due to the Le Mans Moto Grand Prix, it was a great weekend, the sun was shinning and the the motorbikes were out in force, bringing visitors from the 4 corners of the globe.

We too had a lot of visitors over the weekend, here enjoying the local area but ultimately here to enjoy the Grand Prix, as such I had to experiment with various breakfast treats, I had seen the recipe for the ‘Cruffin’ (cross between a croissant and a muffin) a while ago, but had just not had the opportunity to experiment, so this weekend was perfect.

I researched a number of recipes, which is normal for me, and in my search I came across the piece in the Huffington Post from 15/4/15,   so I had to find out what all the fuss was about, it highlighted the story about the recipes being stolen from the Mr Holmes Bakeshouse in San Francisco and of course that just confirmed my need to find out more about these wonderful creations and a recipe I had to have.

I followed all of the links in the news story and also continued my research and found the recipe from ladyandpups, how to make a cruffin with a pasta machine, which I just happen to have, so again that was an omen…….as if I really needed anything else to convince me that I needed to try this.

So I set about gathering all of the various ingredients and equipment, not forgetting the pasta machine.

I put all the dry ingredients, (flours, yeast and salt, oh I tweaked the salt a bit and added some sugar) into the bowl of my stand mixer and mixed to ensure it was well mixed.

Then I added 2/3rds of the water and turned on the machine, mixing on the low setting, I needed to add all of the water and a little more, but it will all depend on the humidity of your flour, so go easy and add the remainder gradually.

Once everything was mixed in, I kept the machine running for another 5-6 minutes until I had a nice dough, it was very soft, and I needed to use a scraper to help with the mixing, but it did come together into a nice soft ball.

Then I left it to rise for about 1 hour, before I moved to the next stage.

I got my pasta machine out, ready for the rolling of the dough, got it all set up and floured to make sure the dough would not stick to the rollers. (all was good)

I cut the dough into 4 pieces, as directed, it was still very soft, so I rolled them out with a rolling pin, just so I had a nice long piece to feed through the pasta machine.

I started with the first piece, but the dough was really soft and it did take quite a bit of feeding and balancing the dough so as to not rip it.

I did persevere and got a nice long piece of dough, (I cut the dough in half so it was easier to handle) thin and ready to apply the very soft butter, which I did with my dough scraper. Then very gently I rolled it up into a log, and buttered the other half of the dough and continued rolling and then cut the rolled dough, down the middle in the length and I could see all the layers of nice thin dough.

I twisted the dough into a knot and placed it into a muffin tin with a little grease proof paper, this was to help with removing it from the tin.

The second piece of dough, I cut in half before I started working it thought the pasta machine, just so it was easier to work with. It was a little better, but again the dough was so soft, it was difficult to ensure I didn’t rip it, with just handling it, but ok, I got another 2 very nice long very thin pieces of dough, which I buttered and rolled as before.

With the remaining 2 pieces of dough (well actually 4, as I cut them in half before I started working with them) I floured the worktop and just rolled the dough with my rolling pin, working it both ways across and length, and I achieved the same results, a nice long very thin piece of dough, I buttered them and rolled as before then cut and twisted and placed into the muffin tin.

Next I covered them with some clingfilm and left them to rise and then it was the cooking part.

So What was the result?

It was a great result for my first attempt at a ‘Cruffin’, nice crispy and buttery, they did benefit from a sprinkling of icing sugar, and to be honest they did taste better once cooled, everything was there.

So next time, I wont bother with the pasta machine, but I will work with my rolling pin as I achieved a great result. No need for the folding and rolling process for the croissants. 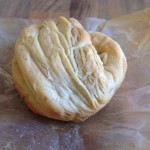 Instead of icing sugar, you can make up a sugar glaze, by mixing some milk with icing sugar and then drizzle across the top of the cruffin.

Remove the cruffins from the oven and allow to cool for 2-3 minutes, just until they can be handled, brush with some melted butter and roll them in some cinnamon sugar mix.

There are a vast variety of toppings, melted chocolate, fruit compote, marmalade, just think of your favorite toppings and enjoy.....