I am always looking for recipes, something needs to catch my eye!

I can’t tell you what ‘that’ something is, but I know it when I see it

So a few weeks ago, I was searching for something to tickle my taste-buds, I wanted to raid the pantry and use up some of the things that were there, clear out the pantry and the freezer if possible.

I found this fantastic recipe from Rachel Allen Potato & Rosemary Foccacia, it ticked a lot of boxes, but I also had some mushrooms that I wanted to use and we love onions, so this was a great start.

I took the recipe as above and just added the other ingredients.

I thinly sliced the onions left them on the side then I sliced the mushrooms and decided to fry them off first, as too often when you put mushrooms in the oven they stay wet and seem to just shrivel up rather than ‘cook’, I fried off the mushrooms until browned and turned off the heat until I needed them.

I washed the potatoes, left the skins on for more flavour and then thinly sliced them and added them to a large bowl with the olive oil salt and chopped fresh rosemary, gave them a good mix then added the pepper and left them in the bowl to infuse until I was ready with the bread base.

I make soda bread on a very regular basis, for this recipe followed Rachel Allen’s recipe as I was testing it and my recipe has fruit and wheaten flour in it to, but to be honest if you wanted to mix the flours it would work well too.

So I mixed the flour, bicarbonate of soda with the milk, I keep sour milk in the fridge all the time, I just top up the bottle from any left over milk or old milk that I have lying around. Otherwise I measure milk into a jug and then add a little lemon juice or vinegar to sour the milk, this is what you need to react with the bicarbonate of soda and give the lift for the bread.

Add the milk to the flour mixture in the bowl and bring it together, don’t over mix it or it will go tough, just enough so all the ingredients are combined together.

Once I had a dough ball, I oiled a baking tray (swiss roll tin) and tipped the dough out onto the tray, and then I pushed it out to the edges and tried to get an even layer. (Not too thin as the base will not rise too much).

Give the potatoes a final mix though and layer them onto the dough, overlapping as you go.

Add a layer of onions and then top with the cheese, I like a nice strong cheddar cheese as you don’t need so much and it adds to the flavour. 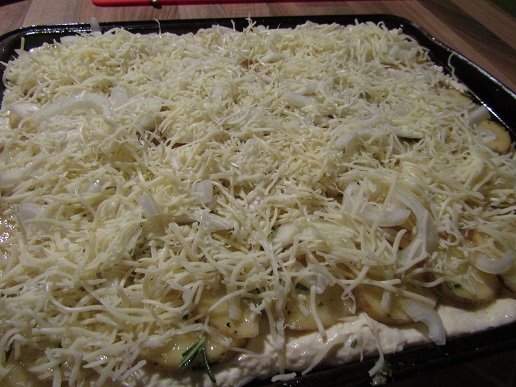 Then it was straight into the oven, no waiting for the bread base to rise as this would be done in the oven.

Bake for 20 minutes until the cheese is nice and bubbly and the base was just about cooked, I then removed it and added the layer of mushrooms and popped it back into the oven for the final 5-10 minutes, just until the mushrooms were warmed through again.

The results were great, we were very pleased with it. Quick and easy and satisfying, ideal for a snack or a quick mid week meal.

We tucked in with a nice green salad and some mayonnaise … yummy.

If you do not have sour milk, then measure out the milk into a jug and add 1 tsp or fresh lemon juice or white vinegar and leave for 5 minutes for the milk to 'sour'.

Do-not over mix the dough, mix until the dough has just come together, there is NO yeast in this dough so you DO NOT need to kneed the bread.

If you do not have fresh rosemary add 1 tsp of dried herbs as a substitute.

There is no Nutrition Label for this recipe yet.