Another grey day outside, so that must mean BAKING DAY……. yeah

I had a baking day at the beginning of the week, but unfortunately for us, the cake went off to a friend who was definitely in more need that we were. To be honest I didn’t really think about it, until my hubby, said that he had sent some pictures to some friends and they all loved the look of it and asked how it tasted, but of course he had to say, “I don’t know, I didn’t get to taste it” he was obviously feeling sorry for himself ……

So I took pity on him and decided to have a look through the cupboards to see what other fabulous ingredients I had…. Ok so some coconut, that will do the trick. 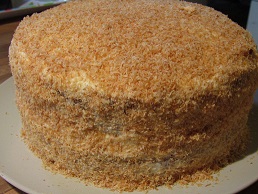 I went to my fail safe cake recipe for this and swapped in the coconut and I used a coconut liquor, of course, you can leave this out and use vanilla essence or coconut if you can find it.

This recipe is really easy, 225g of butter, sugar and flour, with 4 eggs, 1 tsp of baking powder and then the coconut and flavouring.

I started by weighing the butter into a bowl and popping it into the microwave for 10 seconds to make sure it was nice and soft, whipped it little with the electric whisk, then added the sugar and whipped it until it was light and fluffy.

Then I always add the first 2 eggs individually and whisk everything together in between each egg. Then with the 3rd egg and add a little of the flour mixture (flour and baking powder) whisk it again and then the 4th egg and the remaining flour mixture. Whisk it all together until it is just combined.

When pouring the batter into the cake tins, I weigh the tins and mixture, to ensure they are equal. It is usually in the region of 485-495g, it is all dependent on the weight of each of the eggs.

I leveled the mixture into the tins and then popped them into the oven, 25 minutes later, I tested them with the trusty cocktail stick and they were perfect.

So now it the hard part…. the waiting, I allowed them to cool in the tin for 5 minutes then I ran a sharp knife around the edge, just to make sure and popped them out and onto a cooling rack. 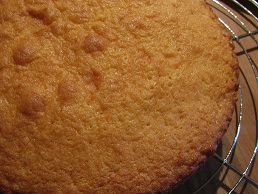 Then it was time for the buttercream icing, I added the soft butter and icing sugar into a bowl and whisked until it was light and fluffy another shot of coconut liquor and it was ready.

I used half of the icing for the filling and topped with a little toasted coconut, then placed the second layer on and again added the buttercream icing and then the remaining toasted coconut…… 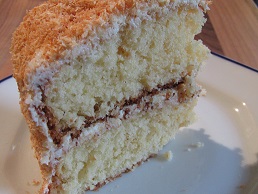 Then it was time for the kettle to boil and cut a nice slice and sit and enjoy…. Ideal for any day, but especially on a damp grey day. 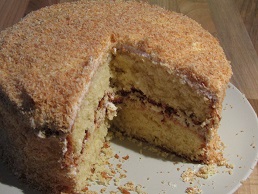 I hope you enjoy it as much as we did. 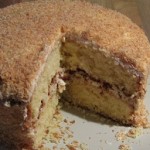 Take care with the coconut when it is in the oven, it will toast very quickly.